Chanting the Feminine Down is a psychological novel in which a female graduate student examines the implications for women in the Catholic Church’s Council of Trent held between 1545 and 1563. The Council defined the Church for the modern era. What begins as a straight-forward, naturalistic examination of the numerous documents written about Trent soon become an itch, a challenge, and a psychological urge to get a fuller understanding of the role of the feminine in church history. Her movement is picaresque through theology, mythology, and psychology looking for traces, shards of the feminine as she calls her search. The movement is also circular, backwards and down through history and time. The traveler takes in 19th century Venice, Renaissance Italy, Boccaccio’s Famous Women, the 8th Century Council of Nicaea, second century Christian fiction, and the many burnings and drownings.

Colette Maria McGovern is a gifted graduate student with an interest in religion, psychology and mythology. The novel opens with Colette ruminating about an emotionally traumatic event, wrapping it in allegories and scenes from her film course. The novel, presented through her consciousness, is lived to a large extent in Colette’s sensibility. Her tumbleweed dreams, as she calls them, begin early in the novel and are an important indicator of her psychological state and her suffering.

Chanting the Feminine Down resides on a number of levels. There are the exchanges with her professors who direct her study; with her psychologist who helps her decipher her dreams; with her mother who mourns the loss of the Latin Church; and with her friends who subscribe to the literal text. In her travels, side-trips, musings, dreams, visions, revelry, and internal monologue the novel takes on an increasingly surreal tone. The traveler is hearing voices, having conversations with the gods, exchanging opinions with the nuncios at Trent, and imagining the voices of her professors coming from the pagan pantheon. The novel is rich in voices, echoes, mirrors and other reflecting surfaces that are intended to give a dream-like feel to the narrative. 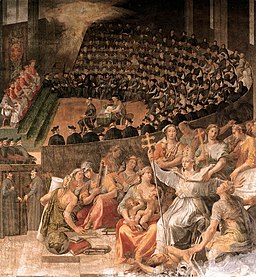 In a broad sense the novel makes concrete the struggle between theology and archetypal psychology. The Church killed off the pagan gods in the interest of monotheism. The Council of Trent took the energy and soul out of images and art. Archetypal psychology suggests the pagan gods and the myths are styles of being and perspectives; another way to look at the world. To a degree Colette becomes trapped in this conflict. Her solution is to try to balance theology with her own interior landscape; her dreams, images and poetry. She comes to understand the Feminine in the broadest sense; as Anima, the Spirit of the Renaissance.

This becomes a life and death struggle for her.