have taught J.D. Salinger’s Catcher in the Rye in high school and college classes but didn’t know until recently that it took the author ten years to write it. Similarly, I have also taught William Faulkner’s As I Lay Dying without realizing he had written the novel in six weeks. The conclusion in a Huffingtonpost.com article is that, with some exceptions, writing a novel will usually take on average many years. And this is where I part company with the authors of the Great American Novel.

The late James Hillman, a Jungian psychologist who admitted his first choice of career was that of a novelist, said deciding to write a novel was like entering the bull ring where one is absolutely exposed to the dangers, both physical and psychological. I have a sneaking suspicion that Hillman still wanted to be a writer. His Re-Visioning Psychology, which is perhaps Hillman’s most important work, with its focus on image, symbol and archetype, as well as the timeless pull of the Italian Renaissance, “re-visions” psychology through the lens of the creative process.

My son Declan gave me this book about twenty years ago and even then, though largely uninformed about Jungian archetypal psychology, I sensed that there was a nascent novelist writing these pages. Perhaps more to the point, I sensed the way Hillman described how the image and symbol were embraced, used and leveraged by artists, theologians and the Vatican could be the stuff of fiction. And what exactly would the battle royal between Psychology and Theology look like?

I was chatting recently with my son about finishing my novel, “Chanting the Feminine Down,” and got on to the matter of writing influences, the human cost of the ordeal and the long arc of the novel. I said I would follow up with an email. This is an elaboration of that. (www.chantingthefemininedown.com)

Chanting has been percolating for some time. I grew up in an Irish Catholic household in north London headed by a father who learned as a child about an extreme form of Catholicism called Jansenism. His three sons felt the sting. I gained some perspective after my father died when I as fifteen. We had moved to the states. In time my mother nudged us out of the house. We all joined the military. The time I spent on an ammunition ship during the Vietnam period changed me. When I was a little more grown-up, I could write That Kingdom Coming Business, my first book of poems. I went on to write my PhD dissertation on patterns of imagery in a number of so-called Catholic writers. I read it again recently and the dissertation seemed pretty bad. But I had found Conor Cruise O’Brien, the Irish writer and U.N. representative, very helpful. He had written the book Maria Cross, which explored the imaginative coupling of sex and the cross in Catholic fiction. I kept his book in the back of my mind. I returned to these themes a few years ago in my poetry book, In the Shadow of the DMZ.

In his Re-visioning Psychology Hillman added more meat to these bones, tracing the movement of the Catholic church from some of the sensuous, early focus of writers like Clement in the second century or even Giovanni Boccaccio in the 14th, through the more severe theology of Thomas Aquinas and others. Hillman’s view was that the church moved away from soulfulness into a land of the transcendent spirit.

I had been fairly familiar with the numerous Catholic Church councils in which doctrine was discussed, formalized and in a sense, written in stone. Hillman’s take was a little different, pointing out that during the Council of Trent (1545-1563) the image once and for all was frozen in time and separated from abundant life. Hillman saw this as a denial of the feminine and the anima principle.

In Re-Visioning Psychology Hillman found in Renaissance writers such as Marsilio Ficino and others the genesis of what he called archetypal psychology that was image-based, made use of archetypal and mythological figures and had a special relationship with death. Dreams figure very prominently in archetypal psychology. 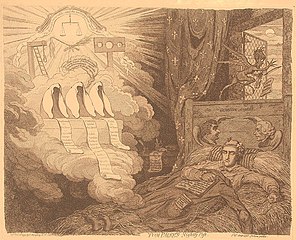 As helpful as Hillman was in framing some of the intellectual poles of a novel, the writing must come from the inside. While I was reading about the various church councils and the like, I experienced an avalanche of dreams that help both write and organize the novel. I recorded all of these in a dream journal. A couple of years ago when the idea for the novel was percolating, I had a dream of the late John Paul II. While a crowd of supporters, mainly women, were chanting “Sainthood Now,” in St. Peter’s Square in Rome, I was witnessing in the dream the Pope, in clerical dress that seemed soft and feminine, slip slowly into the earth. In the feel of the dream there was nothing inappropriate or unseemly about the image. The dream continues with me being turned away from the altar by a priest during the celebration of the mass. I remain outside of the service calling for the inclusion of the feminine while sensing Pope John Paul was at peace.

I called this poem Chanting the Feminine Down. It affects me as profoundly today as it did three years ago. And the dreams continued to come by the hundredweight. At times I felt I was losing my mind. Pope Francis showed up often. So did beggars on the streets of Calcutta who prompted another poem, God in Every Junk Yard Solo. I frequently dreamed I had been abandoned in empty churches waiting for a sign. Dreams became an essentially part of the novel’s tapestry.

What began as an idea to write a historical novel around the various church councils became a psychological novel about a young woman from the Bronx who travels back in time and history to discover shards of the feminine in the Catholic tradition. Her dreams are the stuff of archetypal psychology and serve both to frame the novel and as a counterpoint to church doctrine that overwhelms her days. There would be no novel if it wasn’t for Colette’s anguished interior life and her ability to use the dreams as a symbolic way forward. Colette gets to the point where she is able to exclaim: “This is my Body.”

Chanting the Feminine Down will be published later this year. It’s been percolating for a very long time.