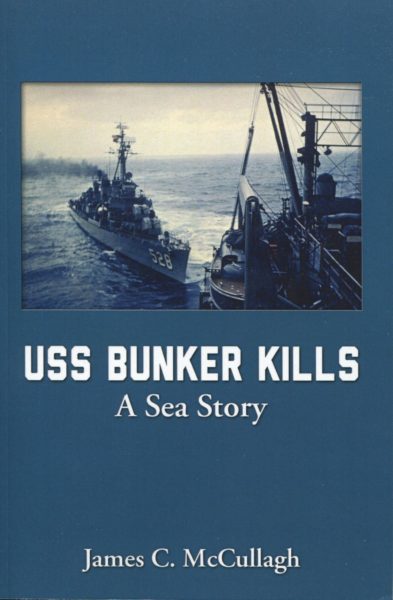 USS Bunker Kills: A Sea Story is an historical, coming-of-age novel about a British immigrant, Neil Strikker, who joins the American Navy during the height of the Vietnam War.

USS Bunker Kills: A Sea Story is an historical, coming-of-age novel about a British immigrant, Neil Strikker, who joins the American Navy during the height of the Vietnam War. The ammunition ship that carries hundreds of tons of ordnance to be dropped on North Vietnam serves as a microcosm of the racial, social and anti-war tensions present at the time. These themes play out during the cruise, aggravated by the presence of an arsonist on board and extreme racial unrest. The ship’s movement is from west to east; the novel’s movement is from the comedic to the tragic, with the captain, something of a bumbler, stumbling from success to success until the Bunker engages in a firefight with North Vietnamese torpedo boats in the Tonkin Gulf. Of the dead and wounded, most are sailors of color. Bunker Kills is a sea story in the original sense of the term. Since men have been going to sea, they have been telling sea stories or yarns. While there is this element in the novel, especially about young men’s sexual adventures, here the sea story is also about perceptions of reality and various versions of the cruise that are captured in more than one “official” log book. At times, especially during typhoons and rough seas, the sea has a voice too. Neil Strikker is a romantic and a dreamer. He is also a runaway, having joined the Navy to get away from religion, his mother, and dead brother. These themes provide a tension throughout the novel. Neil is not ready for the rough-and-tumble life aboard ship. He is quickly initiated through a near-rape experience and like other boots experiences the nasty, sexual rituals when the ship crosses the International Date Line. Neil would rather focus on celestial navigation than on who is getting a blow job in Number Three hold. But he matures through experiencing deaths at sea, typhoons, and the friendship of an African-American signalman. He is literally shocked into consciousness. This is an historical novel in that it is true to the time and location. The book, told from the point of view of Neil Strikker, filters all events through him. Because of his age and psychology, he is not always a reliable narrator and the reader will be conscious of Neil’s sea story, his version of reality. Bunker is also something of a detective novel because there are unexplained deaths, arson events, and a suicide that bring the Naval Investigative service in and out of the action until they finally get it right. The author is a Navy veteran–a navigator–who has captured the voice of the sea, the ship, and the men who serve.

Look Inside
Disclosure of Material Connection: Some of the links in the page above are "affiliate links." This means if you click on the link and purchase the item, I will receive an affiliate commission. I am disclosing this in accordance with the Federal Trade Commission's 16 CFR, Part 255: "Guides Concerning the Use of Endorsements and Testimonials in Advertising."