or the last year, I have been shouldering my way through two thousand years of theology, psychology and mythology searching for the Feminine or Anima presence in the Catholic tradition. This research is for a psychological novel “Chanting the Feminine Down,” which will be published in 2016. This has been a haunting, sobering and educational quest that often spilled over into my dreams and reveries. This is hardly surprising as these issues are powerfully charged and having been churning in our personal and collective unconscious for centuries. After all, religion still drives us to war and inhumanity as well as to infinite compassion and caring. The psychologist Carl Jung considered dreams a form of compensation, perhaps a way of balancing our ego-drive, conscious behavior during the daylight hours. Dreams are tricky, of course. They can streak across our night sky like comets, suggestive and mysterious. But when dreams reoccur, form a pattern, and carry repetitive motifs, we might want to pay a little more attention, record and contemplate. It would be an understatement to say that dreams about popes, churches, theology, the sacraments and other aspects of church ritual have invaded my night space during the last year. On one level, this is not surprising. I grew up as a Catholic, served as an altar boy and lector, and wrote my PhD dissertation on the Catholic Imagination in religious writers. I have struggled all my adult life with the massive paradoxes of the Catholic Church, especially as they are related to the feminine, human sexuality and psychological health. So Pope John Paul II showed up on occasion. Pope Francis was a frequent visitor, perhaps as a way to ground my narrative when I seemed to be at war with the Church. Perhaps this gentle soul has touched me in other ways. In the novel, the dreams serve as a psychological counterpoint to the thunderous theology heard during the daylight hours. This action and adventure takes place in the mind and imagination of Colette, a graduate student at a Catholic college in the Bronx. What follows is an excerpt in which Pope Francis appears in a dream. If there is instruction, it remains symbolic. “Colette is back in another ante-room, a dreamscape watching a scene that might be in a Vatican garden or a non-descript Italian village. Francis and another man are with two nuns who appear to be guides or interlocutors. All stand outside a building waiting to enter. There is humor in the air and the dreamer feels like she could be witnessing a “who’s on first” routine. It somehow becomes clear that the two men are about to enter a monastery to learn who will be the next Pope. The men point to each other and ask the nuns for their opinion, but they seem uninterested. Once inside, the men are supposed to receive a sign regarding who will be the anointed one. As soon as he enters, the unnamed man feels a great change come over him, as if a sign. He feels pumped up, inflated, and full of purpose. He imagines he’s been hit with a thunderbolt that moved him sideways. The man feels he is the anointed one. Power already radiates from him. Then this inflated man travels underground with Francis and watches him in silence as he administers to the poor and to people who look like gargoyles. The Pretender then announces through his tears and anguish that his companion is the true Pope, but no one will listen. An authority figure searches for the Pope’s name in a ledger but can’t find it. His companion weeps some more and begs the official to look deeper. Finally, on the last page of the 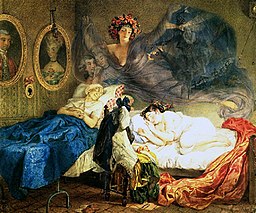 book, the official finds the name of Pope Francis in small letters. The other man drops to his knees and kisses the Pope’s ring and, still underground, experiences the fullness of this holy man. “Holy Mother the Church” the dreamer exclaims with the emphasis on Mother going underground, administering to the gargoyles and other unsightly humans banished from the daylight and are registered in small letters. They are not noticed by the throngs in the Cathedral above where the bells ring out and the angels wait unattended. The dreamer hears the nuns clap in unison but this small sound is drowned out by the movement of heavy, expensive, and embroidered vestments and brocade shoes worn by Princes of the Church who are stepping high over chapel stones on the way to a coronation.”